I am not going to share my political beliefs because this is NOT an issue of politics. It is a SOCIETAL issue. It is a HUMANITY issue.

There are literally thousands of reasons that victims of childhood sexual abuse or sexual assault as an adult do not report. And each reason is valid. You can view the hashtag to see why.

We cannot expect a child to report his/her own abuse. Children do report abuse; however, it is too often met with more questions than support. Here is an example of what happens when a child does courageously disclose abuse: Disclosure 1- unfounded/disbelief. Disclosure 2- made to a mandated reporter (teacher 1) with reports then made to the following individuals at different points (teacher 1, teacher 2, guidance counselor, social worker 1, social worker 2, SBI Agent 1 and 2, child advocacy center, counselor 1, ADA’s 1 and 2). This does not include family members and friends who want to know what’s happening in this child’s life. This disclosure ended in the abuser spending 48 hours in jail, 36 months of probation, and 12 years on the sex offender registry. Unfortunately, in so many cases, there isn’t a disclosure 1 or 2 for a multitude of reasons.

An adult has the ability to weigh the options and choose whether the price he/she will pay for reporting is worth it, whether in the immediate aftermath of an assault or years later. For adults who experienced childhood sexual abuse and a subsequent sexual assault in adulthood, it often will not feel “worth it” to go through the reporting process again.  That is how deeply painful it is to make a report.

Disclosures of abuse happen when the cost of not reporting is greater than the cost of reporting. Disclosures of abuse seldom happen with a person seeking some sort of benefit- because there is rarely any type of immediate benefit following a disclosure. Often, the act of disclosing and the decision to report is further traumatizing, maybe even more so than the actual crime. I pray for the day when every single person who has been abused in any form can report and it not cost them what it does today. But as a person who has made the decision to not report, I will not expect others to report in what society deems as a timely manner.

I am afraid that #WhyIDidn’tReport has resulted in more survivors taking responsibility for something they should not have to defend. I do believe it has resulted in a greater awareness of why we do not report. But it runs the risk of evoking deep shame and self-blame for not reporting when no one should feel those emotions for that decision.

Our expectation should not be for survivors to report more but for abusers to stop abusing. #WhyIDidntReport should be replaced with #WhyIDontAbuse. 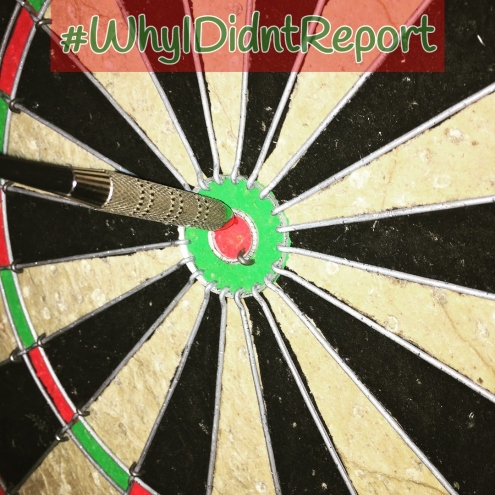